The Prime Ministers of Russia and Kazakhstan met in Moscow 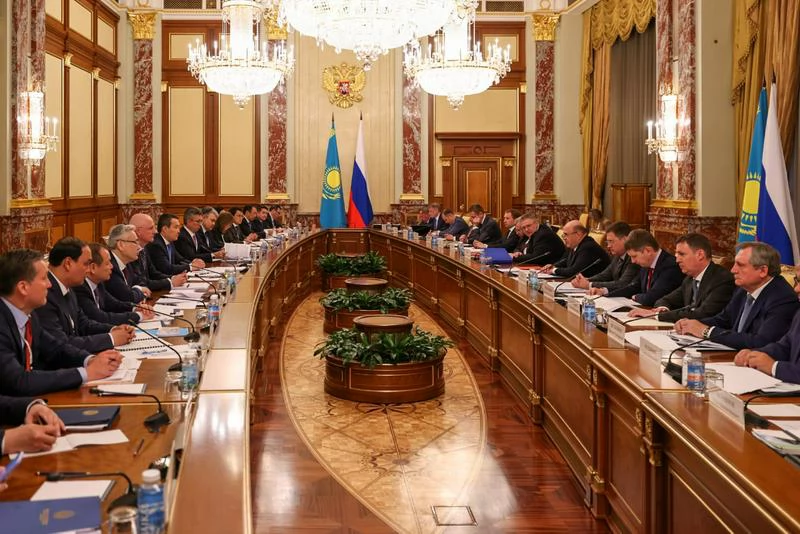 Alikhan Smailov recalled that this year all major events are taking place against the backdrop of the 30th anniversary of the establishment of diplomatic relations between the two countries.

“The most important guidelines for the progressive development of strategic cooperation were identified during the recent meeting of the Presidents of our countries as part of the anniversary meeting of the heads of the CSTO member states,” he said.

The Prime Minister noted that the Government of Kazakhstan is determined to deepen and strengthen mutually beneficial cooperation with Russia in all areas.

“We are faced with the task of further increasing trade and investment. The Russian Federation is the main trade and economic partner of Kazakhstan. We noted the growth of mutual trade by a third last year and the achievement of a record figure of $24 billion. In the current year, the positive dynamics is also preserved – in four months the volume of trade has grown, amounting to $7.2 billion,” A. Smailov said.

The head of the Cabinet recalled the systematic work being carried out to develop multifaceted economic ties between the countries.

“In this direction, it seems important to timely implement a comprehensive program of economic cooperation between our countries for 2021-2025. An important role is assigned to the Kazakh-Russian intergovernmental commission,” he said.

A. Smailov said that 13 landmark joint projects in the industrial sector have been implemented in Kazakhstan.

“I am sure that the high dynamics of the Kazakh-Russian strategic partnership will continue to develop in all areas,” Alikhan Smailov summed up.

“We sincerely value our friendship, good neighborly relations, alliance with Kazakhstan,” said Mikhail Mishustin. “We consider, among other things, the expansion of trade and economic cooperation with Kazakhstan as a priority task.”

The head of the Cabinet of Ministers of the Russian Federation noted that in the first quarter of this year, the volume of mutual trade increased by 12.5% ​​compared to the same period in 2021 and amounted to about $5 billion 800 million.

He mentioned the existing prospects for the implementation of import substitution programs. “There are conditions for launching new strategic joint projects in industry, in engineering, in the transport industry, in energy, in the digital economy,” he said.

“We propose to actively develop interregional and investment cooperation. Accumulated Russian direct investments in Kazakhstan over the past 15 years amounted to about $15 billion, M. Mishustin added. – Additional opportunities, in my opinion, will be opened by the Innoprom exhibition, which will be held in July this year in Yekaterinburg. We are very pleased that Kazakhstan is acting as a partner country of the exhibition this year.”

He also recalled the importance of developing cooperation in the field of education, science and culture.

During the meeting, the heads of government will discuss topical issues of bilateral trade and economic cooperation, including the development of cooperation in energy, transport infrastructure, education, science, culture and other areas.