Home - Blog - The airline performed its first flight to Sharjah

The airline performed its first flight to Sharjah 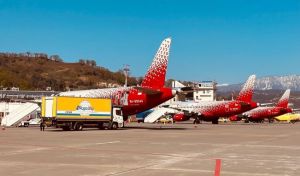 Rossiya Airlines (Aeroflot Group) has launched a flight program from Sochi to the United Arab Emirates on a Superjet 100. The first direct flight to Sharjah Airport departed as scheduled. Flights on the route Sochi – Sharjah are planned four times a week.

Rossiya offers non-stop flights from the south of Russia to the UAE. The dynamically developing and technologically advanced cities of the UAE are popular with travelers from Russia, they are famous for their developed tourist infrastructure, a variety of recreational activities and modern architecture, while the comfortable climate and warm sea attract even more guests to the UAE.

The flight program of Rossiya in the UAE is focused on transit passenger traffic within the Russian Federation. The airline is actively developing interregional traffic, offering direct flights to Sochi.

Flights to the UAE from the south of Russia will be of interest to passengers departing from Aeroflot Group airports in Moscow (Sheremetyevo), St. Petersburg and Krasnoyarsk. According to the schedule, flights on the Sochi-Sharjah-Sochi route are operated on Wednesdays, Fridays, Saturdays and Sundays.

Rossiya is the largest operator of domestically produced liners, actively developing the route network on Superjet 100 aircraft not only within the country, but also abroad. On the air route from Sochi to the UAE, the airline uses modern and comfortable Russian-made aircraft, presented in a two-class layout. The total number of seats on board is 87, of which 12 are business class and 75 are economy class.

Rossiya Airlines is a member of the Aeroflot Group, is the second carrier in the Russian Federation in terms of the aircraft fleet and the largest operator of domestically produced liners. To date, the airline’s fleet has 128 aircraft, of which 71 are Superjet 100 (RRJ-95). At the end of 2021, the airline entered the TOP-100 companies – the best employers in the country according to the HeadHunter online recruiting platform. More than 7 thousand people work in Rossiya. The technical block of the airline in St. Petersburg has the most modern equipment and is able to carry out “heavy” forms of aircraft maintenance. Rossiya Airlines is the base carrier of Pulkovo (St. Petersburg), Sheremetyevo (Moscow), Krasnoyarsk and Sochi airports.